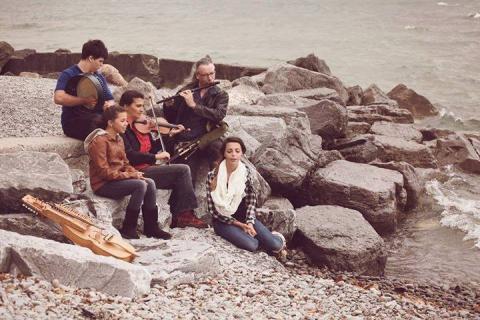 Steafan Hannigan and Saskia Tomkins moved to Canada 10
years ago from England with their three children, Oisin (18),
Eile (16) & Ayisha (13). Steafan, from Northern Ireland
and Saskia, from England, met in the UK and have been
performing together for 20 years, and when the children
arrived, they naturally accompanied their parents to
gigs. After a while, it was obvious the children wanted to share the stage so Clan Hannigan was born. Oisin took to hitting drums as soon as he could crawl and won Comhaltas Mid Atlantic
Bodhran champion in 2009. He also plays hand percussion and kit. He recently Played Massey Hall as a percussionist inPaul Beaubrun’s group supporting Lauryn Hill. Eile and
Ayisha both have taken to singing and Irish dancing, with an interest, in traditional songs, as well as contemporary songs. They are also champions coming 1st & 2nd in the Comhaltas Mid Atlantic Competition, in traditional singing